Level design, would seem somewhat different to the kind of things I would usually think about when designing something. Level design is driven by player interaction, and from my research I would say it seems to be about a harmony between game mechanics and visual design. I would also argue it is also about telling a story without using words or dialog.
I read an article (by Dan Taylor on Gamasutra) on key principles to good game level design; the main points seem to be that player interaction is what keeps the player engaged. While I strongly agree that the interaction with the game is what helps drive the narrative along, I want to discuss the importance of visual design in a level and how it strongly aids the interactions in a game (as this is what is more relevant to me.)
While key triggers and events keep the gamer excited and engaged, I feel that it requires visual cues to draw the player through the level and create a sense of flow.

One of the first points made is;
‘In most cases, the player’s core method of interaction with your level will be navigation – the process of actually traversing the level.  Careful layout, lighting, signage and other visual cues should create a natural “flow” to the level that guides the player instinctively through it.  From an aesthetic aspect, a game’s levels should all work together to create a consistent visual language, through the use of colour and form, that the player can learn, to progress intuitively through the level ‘

So after the level and interactive elements have been blocked out then the visual work must support this set up by leading the player to where they need to be and without being too obvious. It is important to still leave the player with a bit of autonomy, it would make sense to still have areas hidden from the player as to make levels replayable and encourage the player to explore and be rewarded for that. Again it would seem that it is all dependent on what type of game it is as to what level of exploration verses obvious direction there is.
The main ways of trying to lead the player with design would be with lighting, signage and clear direction. Interestingly, I would argue that this relates very well back to the visual composition I was discussing in a past post; the way a scene is composed can strongly effect where the players interest is drawn. Trying to think about it as what is the first thing the player would see, and how will we get them to look over to where the entrance to the next area is. Similar elements like high contrast areas, arabesques and coincidences can get the player headed in the right direction.

I feel that thinking about level design in this way may help to improve upon the interactive elements in a playable level. If those elements are pivotal to the progression of narrative, then we need to visual cues to get the played to the right area at the right time.  Visuals are very important to level design.
Posted by Unknown at 13:08 No comments:

Visual composition was never really something I properly thought about in my past work. My uninformed approach is normally to just go with what looks right by instinct and just settle with that.
Yet after being introduced to composition techniques in my visual design classes, my mind has well and truly been blown. I have had a glimpse into the importance of design, to think smart when creating an image, and to look further than simply the rule of thirds.  To be honest overall this year has been a mind changing roller coaster so far.
So, what did I discover? Well, there is a reason that masters work is so timeless, they were using incredibly clever and structured techniques to create an image that does exactly what the artist wants it to do. They understand what draws a person to an image, where do they look first and why? Once they understood this they started using set formula that means they can make the viewer see what they want them to. This is only in regard to visual composition, not even touching the other areas they had outstanding understanding of.

I have also been reading a blog (http://www.ipoxstudios.com/canon-of-design/) in which these techniques are much better explained. I have only just started to get my head around it and I still have a lot to learn, I’ve had a glimpse but the stuff these guys were doing was so vast.  The author has been doing daily posts regarding different areas and explaining a lot of it so that I may start to understand what they were doing. I am hoping just having a basic understanding and trying to incorporate it in my own work will help me improve.


It is odd to think, but what exactly have I been doing in my art education up to this point? It continues to baffle me how after 7 years of art education they failed to even properly mention basic drawing techniques. No wonder society thinks we just sit around drawing pretty pictures all day.


http://www.ipoxstudios.com/the-rule-of-thirds-killed-design-and-left-it-for-dead-65-of-365/
I really enjoy the blog posts where the author take the time to sit and break down some masters paintings; showing some of the thing they were doing. The link above is an analysed painting by William Adolphe Bouguereau and it is nicely broken down into the different elements used. 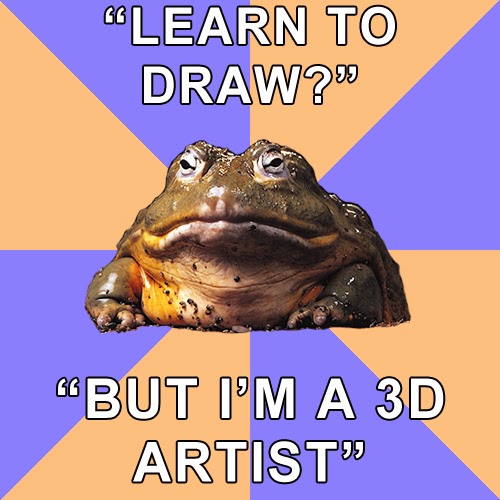 Planning and concepting are two extremely vital parts of any project. A very misconceived opinion I seem to have noticed floating around is; 'I know how to do 3D, so I don't need 2D.' Obviously this is a load of rubbish. Your 3D work is going to benefit and improve tenfold if it has started with decent planning and decent concepts. One of the main focus'/realizations I have had this year is that having a good foundation in your 2D skills is more helpful that just being a wiz at 3D modelling. Developing an understanding of form, composition, and other basic drawing skills takes a long time. The more confident you are with it the better as it is easily transferred to your 3D work. Where as learning the 3D sides is often simply a case of looking it up on the internet.

In regards to concept art, there seems to be a massive misconception as to what it is. If you look up concept art you will usually find, beautifully polished and rendered pieces of work with a strong, well established visual style. So there is a general census that this is what concept art is right?
Well, another of my realizations this year is that actually no, what we are fed by the media as 'concept art' is not that at all. The stuff we are fed would be better named as 'promo art.'

'Concept art is a form of illustration where the main goal is to convey a visual representation of a design, idea and/or mood for use in films, video games, animation, or comic books before it is put into the final product.'

This gives a better explanation of what it is; while this is the general description of what it is, concepting is a lot longer and more thoughtful process than that. There is a tonne of work that goes through a process of developing thumbnails, variations or iterations of ideas before getting close to the final designs; most of it is scrapped or vastly changed.
But this is vital to the process, it is extremely important to be critical and to be clever throughout the design process. It is not just simply drawing pretty pictures all day; it is an intelligent process where the concept artist is creating these images with a very specific purpose and idea in mind.

The fact that the public idea of concept art is warped is mainly becuase of the stuff that is relaeased as concept art. While this has a negative impact on students and amateurs who want to pursue a career in concept art; creating unrealistically high standards for them and restricting them from the real techniques that concept artists use, it is understandable why this has happened.

A company is not going to want to release concept art throughout the design process;

'Companies only release concept art when it is polished and final enough to represent the actual product. Nobody wants a design go viral, which is possibly later rejected and have customers imprint a wrong visual key.' - How not to suck at game design (explains topic very nciely.)

Planning and concepting needs to be treated as a vital part of the design process. It should be done in an intelligent and reflective fashion; seeking as much feedback and criticism as you go. This will push oneself further and nail the key visuals before processing to a more finalized product. It also should not end at the beginning, being prepared to go back and develop more is also important. For example, doing paint overs of an existing level or character is going to help move the idea further. Planning and concepting ensures that the project will run smoother but also is a constant through the whole design process.